The year is 2020. The month, April is about to end.
And just within 4 months of this year.
The Human race has seen many of the messed up stuff the world is dealing with.
The Corona Virus has been spreading rapidly across nations.
Across the whole world we live in.
Thousands of people getting diagnosed of the virus.
Many are dying too.

But with the people locked away in their homes,
the Nature is healing itself.
The stars are more brighter and can be seen from the roofs of our houses.
The fishes are returning back to the ponds.
The lakes, the ocean and everything is becoming beautiful again.
Forests are growing.
Animals are having the time of their lives.

It’s becoming as it was before.
Before us, the humans, the great creation of God, were born, and ruined it.
We ruined a beautiful world.
But it wasn’t our fault, right.
We had to do stuff for survival, first.
And then, for development.

But what we didn’t know,
was that messing up with nature for our development,
would be coming back to bite us.
Maybe it’s karma playing its course.
And it chose a unique year to do that.
The year Two Thousand and Twenty.

It’s getting real bad.
Wise men are dying.
People have been locked down inside of their homes.
An uncontrollable disease has been floating around person to person across the globe.
And amidst all this chaos,
Nature is healing itself.

Maybe it’s the end, as many of us believe.
Or maybe, it’s a new beginning, a start of a new world.
A world like before. Like a thousand years ago.
A world full of greenery, full of crystal clear water bodies.
A world with a lot of animals, lots of different species.
A world with less pollution. A world with peace.

It could be a beginning of a beautiful world. But the thing is,
that many of us, might not be there to see it.

Is it really, the end? 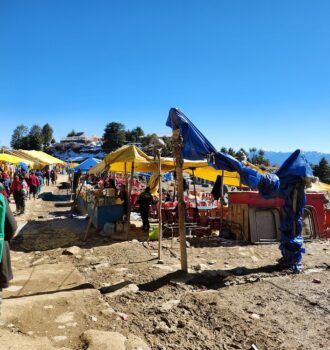 Why Not To Visit Kufri ?

Within the Untapped: The Juhila Falls Memoir

Become a #SoleMate and Never Miss an Update

Become a #SoleMate and Never Miss an Update