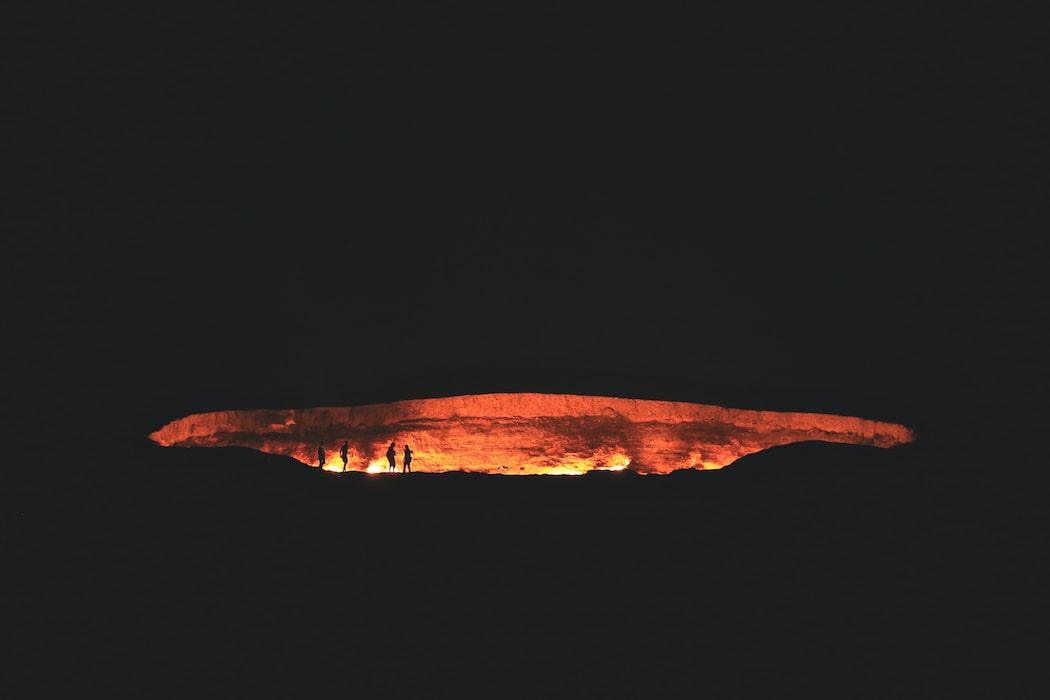 The Door to Hell

We have all grown up listening to all the tales, seeing various movies and even reading many sorts of books about the topic of Creation. About how we came to be. About the world we live in. About the scripts in The Holy Bible. The most fascinating one, for me and maybe a couple of thousand more around the world, has been the one depicting the three realms of the universe: the Heaven, the Earth and the Hell. All these realms have been told to be divided further apart from each other. But, nonetheless, the favorite creation of God, Humans have learnt many things since their creation and the best thing they learned about is- To Travel! And in all these travels of humankind, we have found many places in the Earth itself that is pretty relevant for our imagination of a “Heaven on Earth“.

But it is actually very unpopular for someone going to a place and calling it and even officially naming the place “Hell on Earth” !!

That’s actually what happened with this huge hole filled with an eternally burning fire dug through the ground at the Kara-Kum Desert in Turkmenistan.

The Legend of the Darvaza Crater

The Darvaza Gas Crater is the very spot where something happened which created this “hellish” pit which burns still after almost fifty years. What that “something” was, you ask? Well, we’re about to find out just that..!
Let’s start from the start. There is this hugely spread out hot desert called Kara-Kum in Turkmenistan. As you go along deep into the deserted land, you’ll see nothing for miles except the huge chunks of sand. 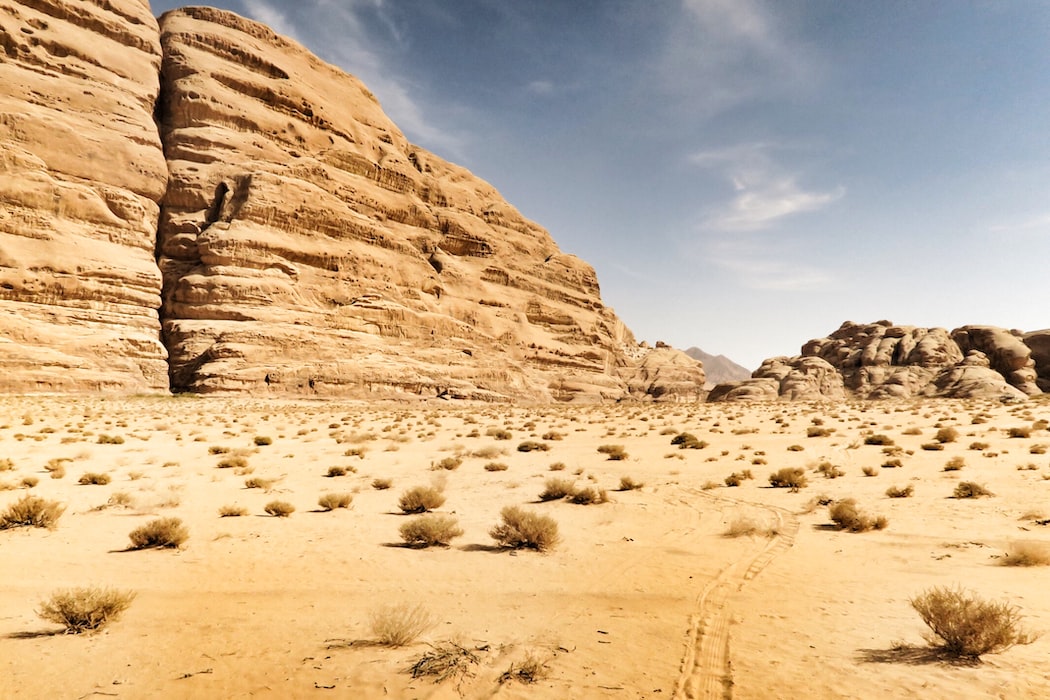 So, in 1971 a group of the Soviet Union geologists was sent to the place for a drilling gig to look for natural gases present in the area. They set up the equipment and started the drill. But what happened next was tragic. The drilling rig accidentally hit an underground cavern which was actually a hub of so many natural gases just underneath where the geologists drilled. It collapsed and formed a large hole on the ground. When the geologists somehow tried and got their hopes up, that “it’s okay, it’s just a huge hole in the middle of nowhere, nothing much.” Universe did what it inevitably does: it took their hopes away!!

They found out that the collapse was too strong and the underground gases, especially a huge chunk of methane, started to rumble it’s way up. It was steady, but not slow. It spread like honey spilled on the floor: – well, filled with a natural gas-capable of almost destroying your very existence-sort of honey– but you get the point!
The Soviet Government took a stand to stop the spread of the gases by lighting it all up on fire- which happened- but not before the cavern became a gigantic 230-feet wide hole full of dangerous natural gases. The Darvaza Gas Cavern was lit up and the fire was thought to burn away in a few weeks maximum. But they had it all wrong. The fire didn’t put out at all. It has been almost fifty long years – five decades – and the eternal flame burns on.

According to the Locals

The Door to Hell was a name coined by the nearby village people as they saw the ever-glowing and malicious flames finding it’s way out from the large and deep hole. They even believe it to be haunted. Although none of that sort has come to play in all these years. It is quite basically a “football-field” huge pit with natural gases burning all over the area.
The locals avoid getting anywhere close to the massive burning hole as they believe it to be cursed and that it is indeed some sort of gateway which has unlocked Hell..!!
And that there’s not much time left when the demons and the negative forces find it out and try to take over our world..!! 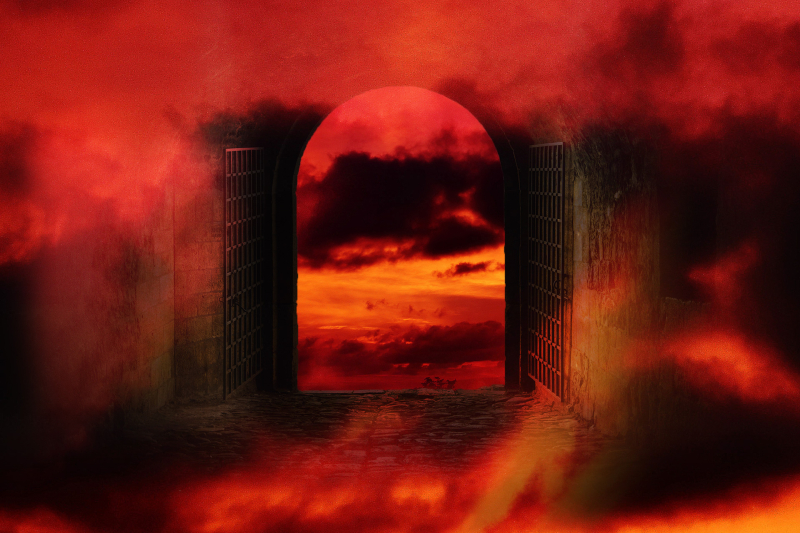 When you get there and ask any local about the place, you will immediately see their otherwise happy faces turning pale – almost immediately. They would suggest you not go anywhere near the place. “It takes you over. It possesses you. You won’t be in control anymore. Your emotions will flow like a broken tap in the washroom”. Alright, they might not say that last bit, but.. you get the point!
They claim that when a person gets way too close to “The Pit”, their emotions get the best of them and they start to remember all the mistakes they’ve made in life – or rather, the Sins they committed and they are slowly getting drawn towards the edge of the pit. ‘Cause that’s what happens in hell right. It’s a place for punishment for the Sins people committed.

Visiting the Door to Hell

If you feel you’re brave enough and have a “dancing with the Devil” soul – this place is Heave-n- for you..!! Best time to visit and experience the eternal fire hole is at night whenever you are in Turkmenistan. The whole area seems extraordinary during the darkness as the bright flames reflect through the sky making the entire area shine and glow – it’s a fascinating view.

The Door to Hell in Turkmenistan is slowly becoming a tourist attraction and visitors from all corners of the world try to explore it in their travels and experience if what the locals claim is real.
Nobody actually does know what exactly happened during the drilling gig in 1971, all we have our stories and legends. All we do know is that whatever happened fifty years ago at the Darvaza Gas Crater or the Door to Hell in the middle of the Kara-Kum Desert, Turkmenistan, was terrifying enough for the Soviet government to destroy the records and burn down the place…!!! That – is horrifying enough..!!