” If Poetry is Worship, Mine would be the Temples of Khajuraho “

I happened to get an opportunity to enter this Ancient Wonderland existing in Madhya Pradesh, while pursuing an Internship at a local travel agency.

It was completely random, one moment I was sitting at my desk staring at the laptop while designing an excel sheet with the contact information about a few hotels in God’s Own Country, and the next moment, my Boss asks me if I wanna go to Khajuraho.
Obviously, I didn’t fully understand it. I was blank. Then he explained that a tour is being set up: a school trip with students and teachers to this place of historic significance, to Khajuraho.
See, I am a simple person, someone says “travel”, I say “YES..!!” and that is exactly what I did, I told him I’d go. I would never say NO to Travel, be it any place, at any corner of the world, I’m in. Travel is my escape.

Khajuraho is a city with a very interesting tale due to its history and the way of life of the people who lived there hundreds of years ago, which is depicted on the temple walls through a unique artistic architectural technique and is also narrated in the voice of Mr. Amitabh Bacchhan at the evening Light and Sound show the temple offers.

This tour was an exposure trip for me to a place of educational and historical importance. We covered the basic popular and significant sites including the Western Group of temples, Jain temples and the wonderful waterfalls: Raneh Falls and Pandav Falls.

It was the very first time I experienced a tour while being on the other side of the act, seeing how it actually gets into play. It can be understood like in a drama playing on stage. The tourists (them), are the audiences watching and enjoying the act, while the tour managers (us), are the people managing the act from the backstage. It was a very educative and a keen learning aspect for me to see how a tour is organized, how it is managed, what problems might occur and how to resolve them.

How to Reach Khajuraho?

Our journey begun at late evening as we waited for the bus near the school. See, we were three people going with the large student-teacher group toward Khajuraho. We had three vehicles booked: Two Volvo Buses and A Tempo Traveller. I got to be the one sitting with guests in the Traveller. It was pretty great for me, as the people I got with me were all mostly students with a couple of young teachers. It was great.

The distance from Lucknow (yeah, I’m from Lucknow) to Khajuraho is approximately three hundred kilometers and it took us all-in-all twelve hours to reach the destination, including the stays and halts.
Other options to reach Khajuraho from Lucknow are by train and by flight, as well.
Khajuraho has its own domestic airport which connects to all the major cities across the Indian sub-continent and makes reaching Khajuraho much easier.
If you’re looking for a little less-costly approach, however, you might opt for the largely spread out Indian Railway System. Train seats can be booked at cheapest prices and is said to be the most budget-friendly way to reach places in India.

Where to Stay in Khajuraho?

We had booked three hotels for our travellers in Khajuraho and I am gonna give you the necessary information on all of them by listing down the three hotels down here for you: Why worry, when Travelsole is here, right..!!?

Where We Stayed in Khajuraho?

Distance from Khajuraho Temples: Almost 1 kilometre
Location: Power House Road, Khajuraho
Star Category: 3*
Best Price: Rs. 2282 per night (GoIbibo)
Budget Stay Options in Khajuraho?
If you are a solo traveller or maybe looking for more budget-friendly accommodation options when in Khajuraho, following is a list of the most in-budget hotels you can opt for:

Western Group of Temples in Khajuraho

Our first site was the major tourist sight of Khajuraho, the Western Group of Temples famed for the erotic Kamasutra temple architecture – images of a through and through life of the people of the time, sculpted on the outer walls of the temples.
The story is thousands of years old, when the Chandelas rules over the place. They had all the Khajuraho Temples built representing the various phases of life: from child birth to sex to war to survival.
If you look close enough, you may find all the phases of life depictions on the temple structures. Each phase is represented in all its glory, with the injured elephants and horses, rulers going at war, their personal lives, birth and deaths, everything. It really kinda’ fascinates you while looking and giving a meaning to what all you find on the walls. And just to think the power of creativity of the people who actually built it all.

You will find many shops in front of the main entrance of the temples, spread out and can look for souvenirs and temple gifts to take with you as a memory of the place of desires.

The Light and Sound show in the Western Temples of Khajuraho is pretty famous as a huge lot of crowd comes in for the same in the evening. The narration and the depiction of the story of the Chandelas is really fascinating to experience.

The History of Khajuraho is depicted in a beautiful manner telling the tourists about how the temples came into being and about the Chandelas as well.

This story a lot of you guys might know already. Those who don’t, well I would not want to spoil it for you so you can go visit the show and get to really feel what happened.
The main context included: The moon, a beautiful woman named Hemavathy, and their son, Chandravarman.
The son established the Chandela dynasty and built the temples with sculptures depicting the human passions and the pointlessness of it all.

Eastern Group of Temples in Khajuraho

The Second Day for us started a little early as we had to cover few of the other places and still have time to relax. It was a two days trip and we had to give people some relaxation as well as to ourselves.

Then first location we went to was the Jain Temples (Eastern Group of Temples, Khajuraho).

The Eastern Group of temples are the ones which were actually created before the Western temples in Khajuraho. These temples are spread out in a large area in the more older version of the Khajuraho we see today. It’s in the more village area. And people coming to Khajuraho, mostly tend to skip these. But that’s where they go wrong. The Eastern and Southern Groups of Temples in Khajuraho are a must visit after a trip to the Western ones.
The Eastern temples are divided into two parts: The Jain Temples and The Hindu Temples
The Jain Temples include the famous temples like :
Parsvanath Temple, Khajuraho

The Parsvanath Temple is the largest of all the Jain temples in the area and is dedicated to the Jain Tirthankara Parshvanatha. The sculptures and designs on the walls of these temples depict the celestial beauties or Apsaras in several extraordinary and beautiful postures.

The Adinath Temple depicts figures of the Yakshis. Yakshi is basically a female earth spirit considered as a symbol of fertility among Hinduism. It is dedicated to the Jain Tirthankara Adinath.
On the other hand, the Hindu temples include:
Brahma Temple, Khajuraho 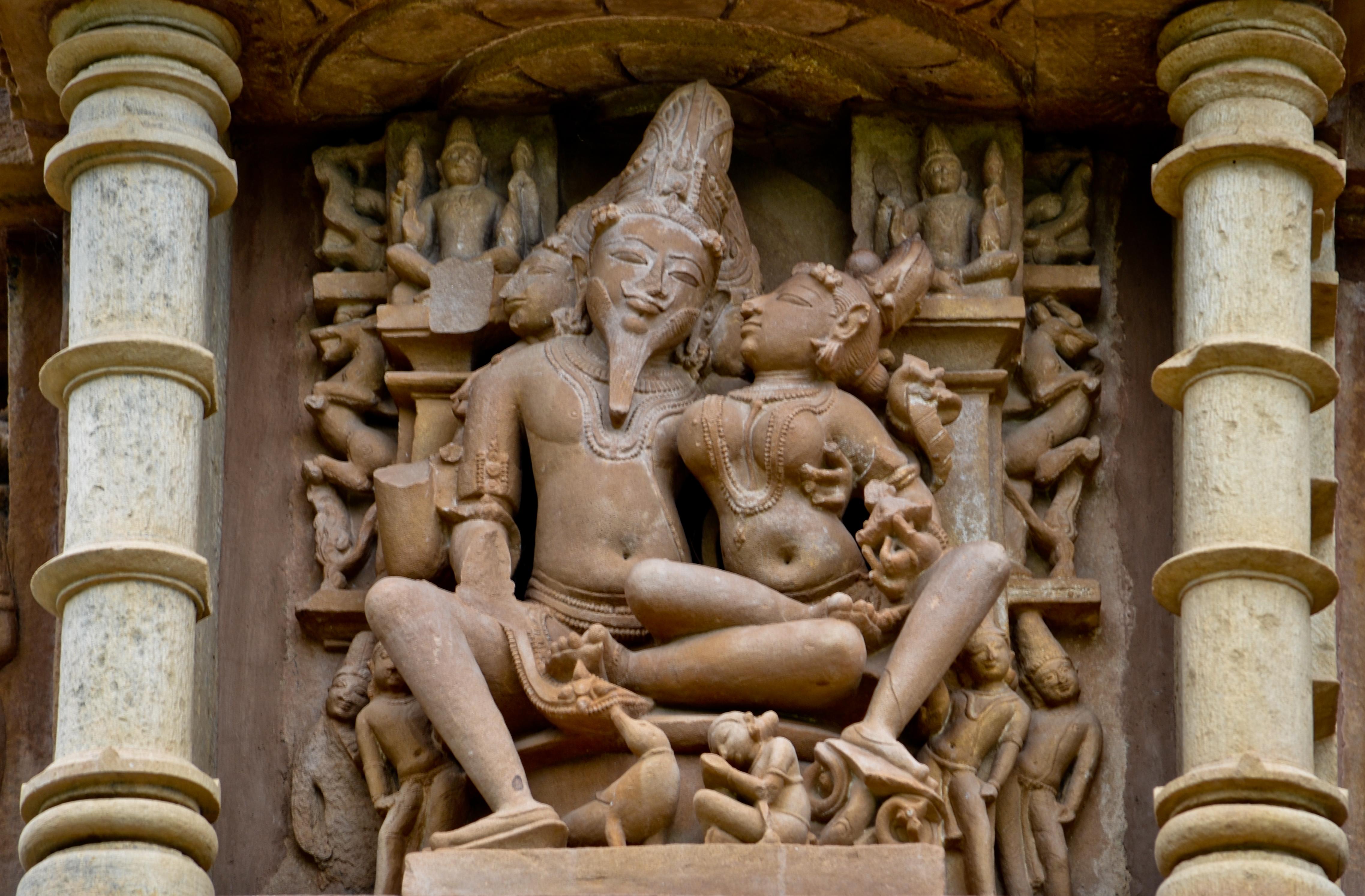 Holding fame for its four-faced Lord Brahma image situated in the middle of the sanctum, the Brahma Temple is made up of granite and sandstone.

The Vamana temple depicts Apsaras or Celestial beauties on the outsides of the temple structures in sensuous carvings.

Sometimes known to be the Grand Canyon of India, The Raneh Falls is a naturally created multi-colored waterfalls giving out some massive photography opportunities for your social media handles.

You can also indulge in various Cycling and Trekking tours offered in Khajuraho which take you to the Raneh Falls.

It is said to be at its best during winters, when you can see the incredible gorges filled with shining water travelling from one gorge to another creating a very fascinating view of the multiple waterfalls. Locals even refer it as the “Mini Niagara“. 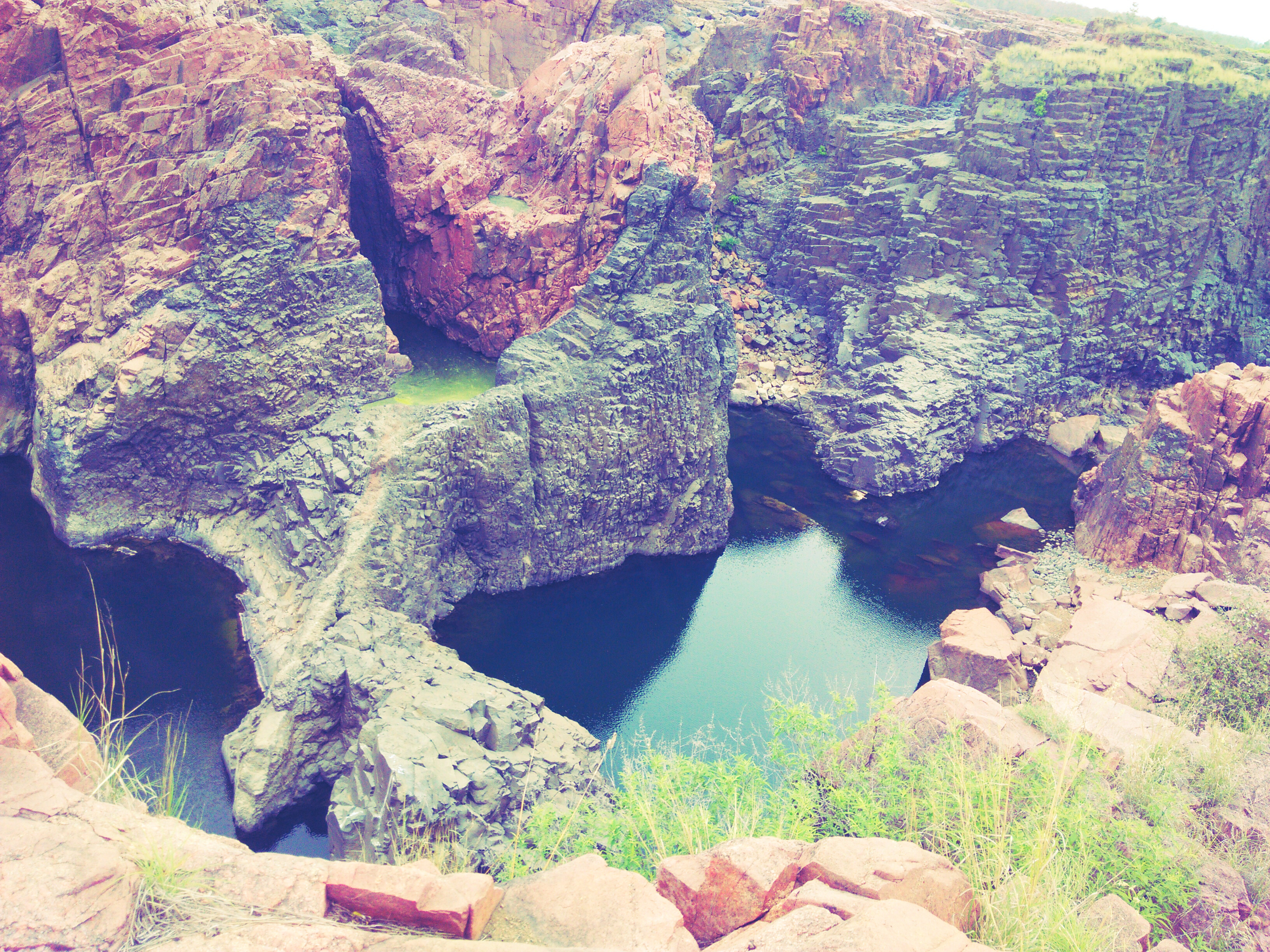 Since it was not the appropriate season for waterfalls when we went there, there wasn’t any. One can experience the greatest of falls at the time of August when the Rainy Season is on a high level. Still, the huge, colorful rocks covering the Raneh Falls were a great natural site to look at and form a picturesque scenery to register the nature at its very best.
Pandav Falls is another natural waterfall in the area. Situated nearby the infamous Panna Tiger Reserve, it takes around two hours to reach there from Raneh Falls. Even if you get to come here in summers, when the waterfall is comparably low, you’d still be up for a delightful look at the creation of nature. We had to walk from the entry to get to the falls for around 500 meters, and there were some stairs to get to the waterfall area going down towards the falls and the caves.

Except for the spectacular view and the peace you attain while spending time at the Pandav Falls, there’s a mythological meaning to it too. As the name suggests, during the years of exile, the Pandava brothers from the epic Mahabharata roamed around the country. One of those places they rested in was this particular spot at the Ken River, now called as the Pandav Falls. The caves you see in the area surrounding the falls are also, quite interestingly five in number.

Our journey ended after the visit to Pandav Falls. We went straight towards our hotel, relaxed a bit, and left for journey back home later in the evening while remembering and registering all that we learned about The Way of Life in The History of Khajuraho..!!